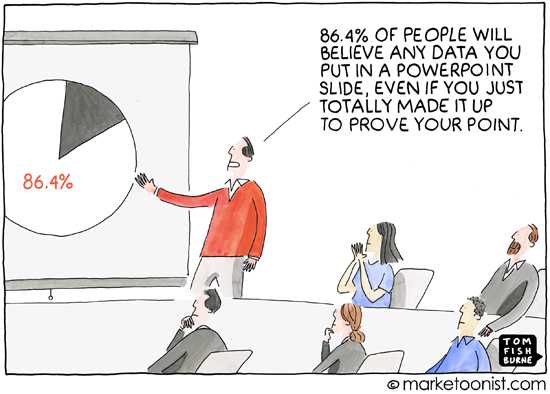 The joke in the comic is too true. Numbers in a PowerPoint are rarely called into question—even though challenging the assumptions of a presentation is an easy way to appear smart and insightful. However, there is little incentive to question any data that doesn’t conflict with one’s currently held beliefs. On the other hand, if there is conflict, even additional evidence beyond the charts and graphs will rarely change someone’s mind, so the numbers—even if accurate—may as well be made up.

Data-driven decision making can lead to some strange places when those who act on the data don’t understand where the data comes from, have too much confidence in its validity, or have a weak understanding of what it means. Fishburne, in the blog post that accompanied the cartoon wrote:

I heard a marketer say recently, “Publishing numbers in a powerpoint deck does not make them true.” We have never had greater access to data to make decisions. But it has also never been easier to cherry pick data to support whatever point we’re trying to make. Being data-driven in our decision making increasingly means being data-skeptical.

Knowing how to be skeptical with data is also a difficult challenge. Real numbers can sound fake if they are too round (i.e. 25%), and a decimal point in the percent is usually enough to make a number look legitimate, even if the evidence behind it is thin. Cherry picking data to make a point does not prove anything. Proof requires honest consideration of all the relevant data, not just the data needed to support the thesis you came up with before opening Excel to draw the pie chart.